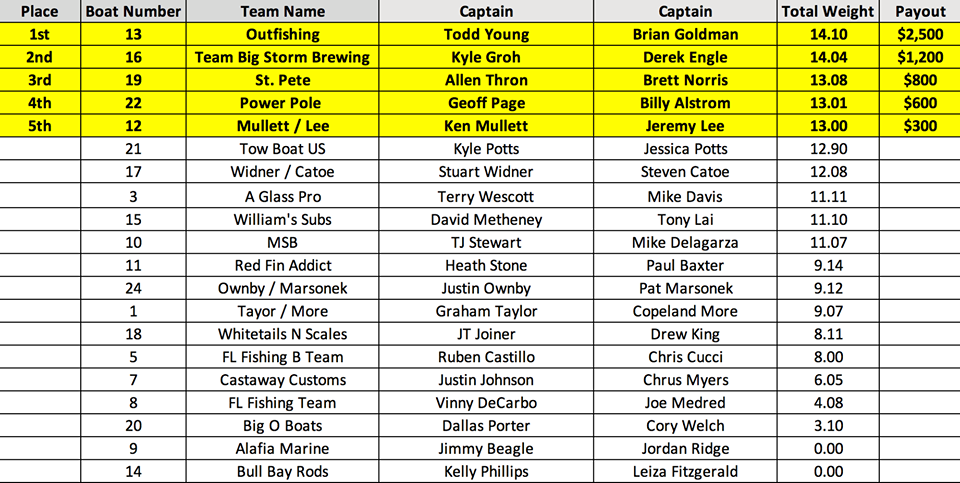 Saturday the 21st was a first for many things. It was the first tournament I have fished here in Tampa. It was also a well known tournament that brought out some big names in the redfish tournament world. Capt. Todd Young of Reel Memories Charters asked me to fish this strictly artificial tournament with him. He was able to obtain a sponsership from Ted Stefan of OutFishing Apparel.  Saturday morning couldn’t have come quicker. I went out the day before looking for some good fish. Found some decent fish. Other schools that were previously there were gone. I put a game plan together. The morning of the tournament we set out in complete blackness and slowly putted out way into posotion. While putting I noticed some bioluminescence in the water. That prompted me to switch the color of my D.O.A Paddle tail grubs to something that has a little glow in it and was lighter colored as the water was still very clear. I chose the Glow/Gold Rush belly 3″ Shad Tail.  One the tournament started we missed a few fish on topwater right off the bat. Shortly after we were swarmed by a massive school of jacks that halted out fishing for about 5 mins. I quickly decided we needed to push in even shallower to find the fish. I assumed there were going to take advantage of the water while they could before the tide emptied the flat. My decision was dead on! We quickly found some tailing fish. First fish to the boat weighed an amazing 8.0 pounds.  A prefect fish. Second fish was 8.4!! 4 ounces over. 4 ounces from a perfect score. We quickly boated 6 more fish each fish upgrading until we landed a 6 pound 10 ounce fish. A 6 ounce upgrade from the previous fish. That fish would be enough to last through out the tournament! We landed several more fish throughout the day including a massive 16.4 pound monster red.  This was a GO LIVE Facebook tournament and it was very exciting as well as intimidating hearing all the boat constantly going live. In the end we remained triumphant! Putting us in good place for team of the year.  Looking forward to the next tournament in April!! Until then everyone stay safe!! Plenty of availability for charters due to the COVID-19 nonsense. Boat ramps remain to be open until further notice. Book you Tampa Bay Fishing Trip Today!